PART ONE
I purchased the ZTE Imperial Max and had nothing but problems from the start but dealt with it because of the high costs of Samsung phones and my finances a year ago. One month before my warranty was about to expire in May, I woke up to the smell of burning electrical wiring. The metal part that plugged into the phone was so hot that the rubber around had melted and stuck to the kitchen counter. Before anyone asks, yes I was using the original ZTE adapter and usb cord, and no, there was nothing wrong with the electrical socket. I went to US Cellular (who said they had never ever heard or seen this happen) and was advised to contact ZTE since the phone was still under warranty. I tried off and on during the day at work but kept getting the message that they were busy with other customers and would get to me as soon as possible. I refused to pay 24.00 at the phone store for the type "c" usb cord that is authorized because of course the ZTE phones it don't use a micro usb cord like every other phone does so I bought a cheap one at the drugstore because now my phone would not hold a charge for more than about 15 mins. I got on the support page and after 20 mins. on on-line chat I was finally told that this person could not get a live person to call me and I would be contacted via email. I was infuriated. This piece of crap phone could have started my home on fire and I was waiting for an email...

About 5 days later I got that email, it was a generic email stating how sorry ZTE was for the inconvenience and that someone would be getting back to me soon and would I please provide all the information about my phone. I cursed a lot and after providing all the required information, I also sent a message asking that a human being call me after they receive this message because I don't appreciate being contacted via email.
A few days went by and I got no response, so I went back to that email and resent it with another attachment with some more aggressive attitude demanding that someone call me back. Guess what, I recieved the same generic email as before, nothing different, asking me for the same information as if I had never chatted with customer service, or provided two previous responses.

Now, Two weeks have gone by and I had gone out of town on emergency to care for my daughter in upper Michigan and she didn't have good satellite/internet reception so I couldn't deal with it for two more weeks. When I got back home I was irate to find yet another generic email exactly like the others. I lost it! I went to US Cellular with an axe to bury because by now, my warranty had officially expired. By now the staff and the manager had had it with me too but also couldn't believe ZTE's lack of customer support and the repeated generic emails had annoyed him too so he contacted David Marsala, ZTE's Distributor for our area who personally came to the store and traded me a brand new, ZTE Blade Max 3. He apologized profusely for the emails, for almost setting my house on fire and gave me is email address and said if I ever had problems again, to give him a shout out. I went home, and down loaded everything into my new phone and like clockwork, at 8:30 pm my son sent his 2 second video of him taking his medication and said goodnight mom.

PART TWO
The very next morning I was sitting in US Cellular again, on the phone with their support tech troubleshooting why my brand spanking new phone would not play the 2 second video that my handicapped son who by the way, is required, by his doctor, every morning and evening to text me a video of him taking his medication. What I got instead, is a still frame, pixelated, distorted picture with sound. So was the video of my grandson (who lives across the country) who had just had taken his first steps the day before.

After two and a half hours with US Cellular's tech support, resetting to factory, trying a couple different video viewing apps and trying to do a flash update it was determined that the software what too new and had to be dealt with by ZTE support. So I got on the phone with ZTE, after over an hour of doing basically the same crap, ZTE determined that my brand new, fresh out-of-the box phone that they replaced for the one that almost set my house on fire, had to be sent to Grapevine TX for repair. I messaged the ZTE Distributor David Marsala and kept getting the message that ZTE's server would not accept my email... not that it was undeliverable like it was the wrong email. So he never even got my "shout out".

I sent my phone in and after 15 days, I was called and told that they were not able to fix my phone. so the sent another brand new phone. So, Imagine my shock yesterday when I reactivated my NEW phone when I son sent is 2 second video that surprise, I got a still frame, pixelated, distorted picture with sound. Infuriated beyond belief, I got on the phone with support and went over everything again. I was told it was a BRAND NEW phone which comparing numbers on the phone to the box is true. Then I am told that is was US Cellular's MMS issue which I had already called and it was determined it was not. Then I was told that US Cellular had a limit on how long MMS videos could be which had been determined on both occasions was not applicable to a 2 second video or to this software problem. I could accept and view them on the ZTE Imperial Max until it melted so obviously it isn't US Cellular's restrictions. So when he obviously couldn't come up with anything that I couldn't counter, he said he would expedite my claim and someone would call me, which someone did this afternoon. Of course they want me to send it in for repair again. The other option is to wait for the next update to see if this corrects the problem. I asked how soon that would be because the video feature is extremely essential. There is no scheduled update!

REALLY ZTE?! Your product is damaged. Your software doesn't work. You told me you couldn't fix it and sent me a new phone and it still doesn't work. Sending it back and forth isn't going to do a darn thing if you don't fix your software and I didn't buy your product to have just parts of it work and not others. How many new phones are you going to send me until it works? Or until that update that doesn't exist yet goes through?, and that doesn't guarantee a fix anyway! I bought these damn phones for the larger screens to view the damn videos to monitor my son so he can live on his own, and to watch my grandson and soon to be born granddaughter on an affordable phone and not be tied down to a computer and not have the damned thing almost burn my house down in my sleep!!!

This is not a video of my son's cat!! 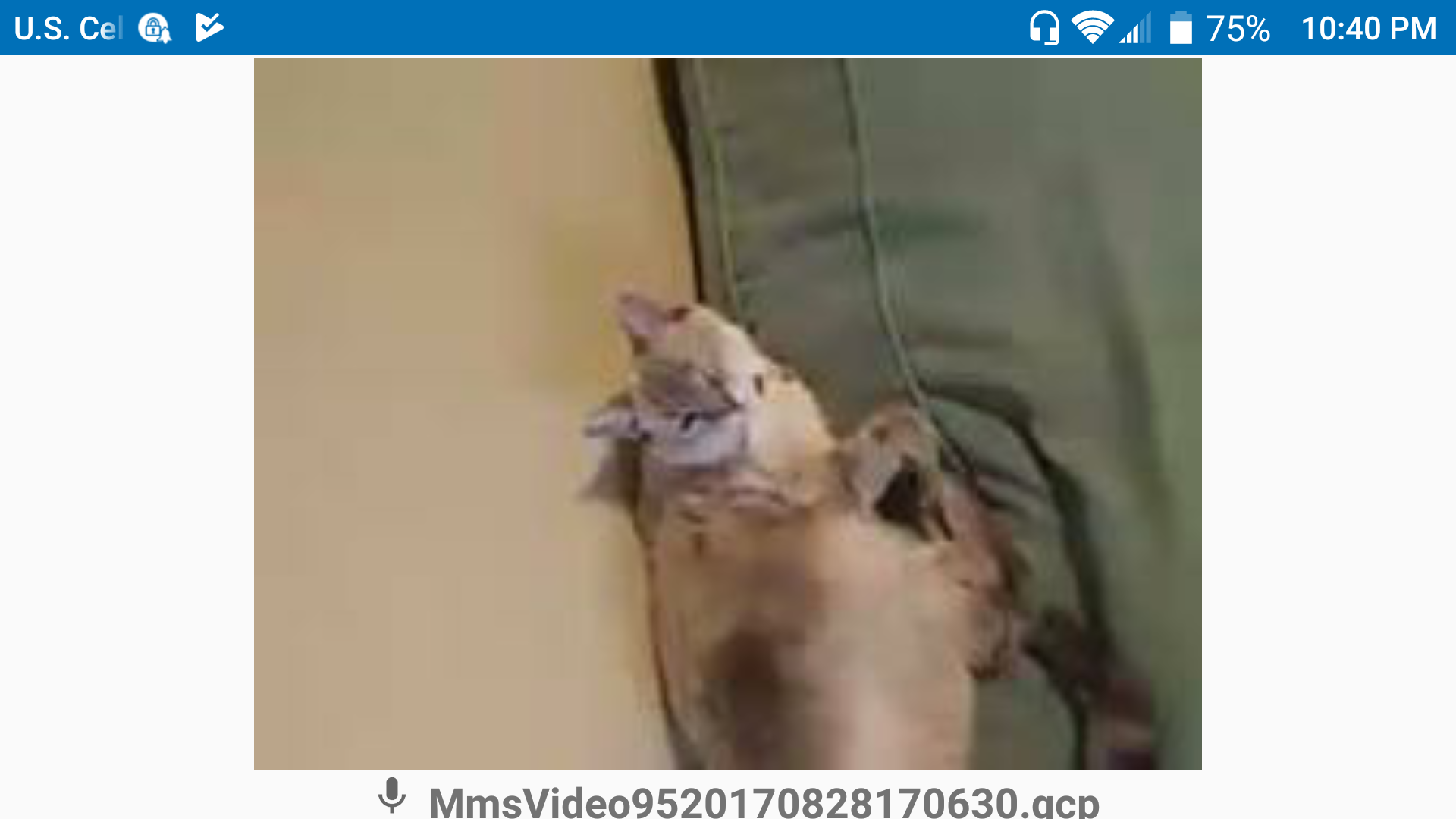 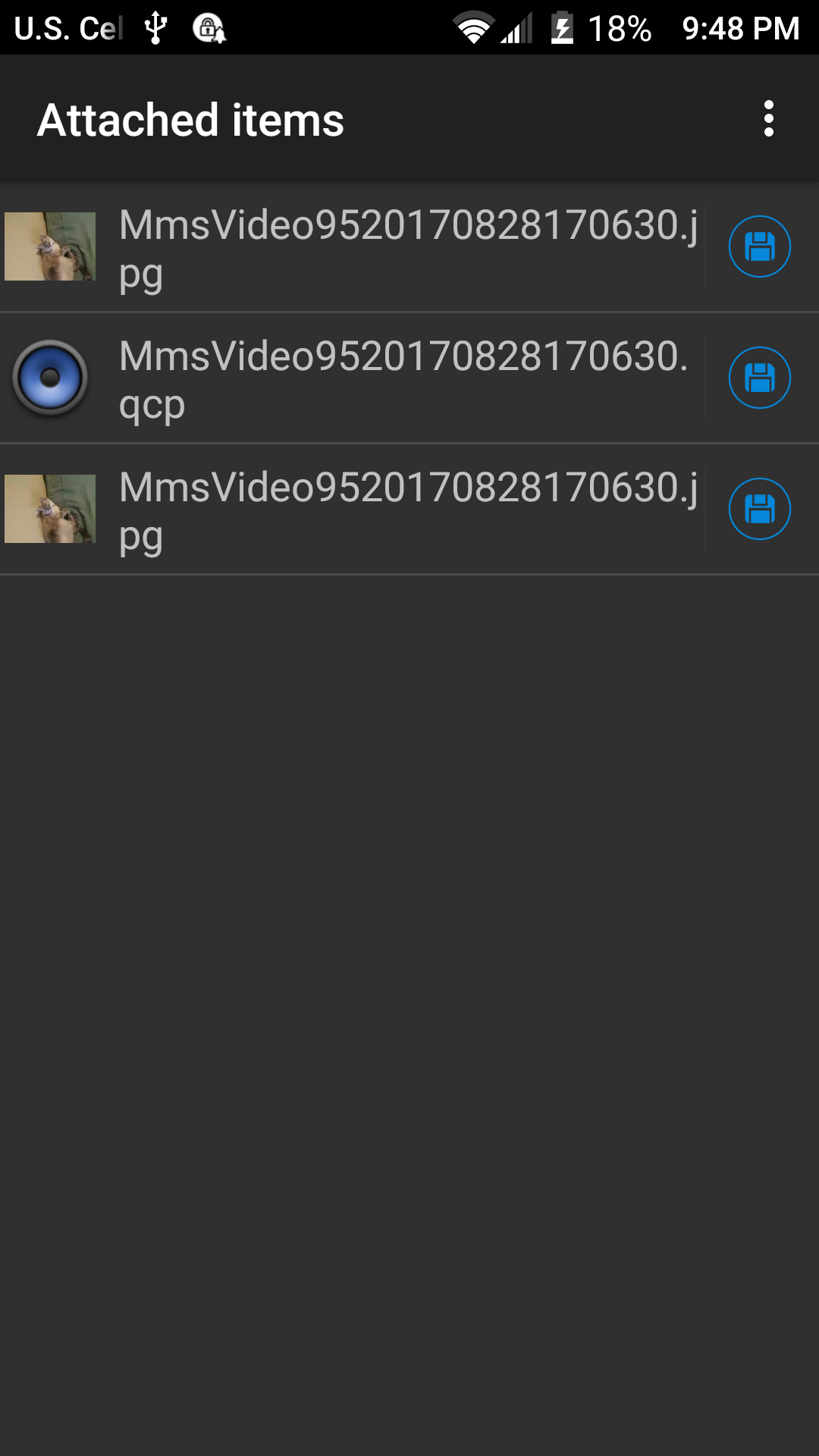